skip to main | skip to sidebar

I've finally gotten back to working on my 3-D Trombone concept. It's been a while - work has gotten pretty crazy lately, but I've just gotta get back to this to exercise my creative outlets.

Here are a few photos of the electronics: 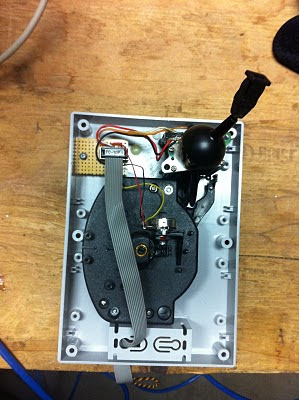 The large black unit in the center is the 3-position joystick I liberated from a Gametrak controller. You can see the joystick in the upper right. The circuit board in the upper left is just a wiring junction I built to make the electrical connections more secure. All the potentiometer connections and the power supply line come in/out on the ribbon cable you see (IDC connecors FTW!).

Here's another view where you can see some of the mechanics of the Game Trak controller. It's pretty simple, really - a gear system drives a potentiometer. The large enclosure houses a large coil spring that provides the return force for the z-axis. 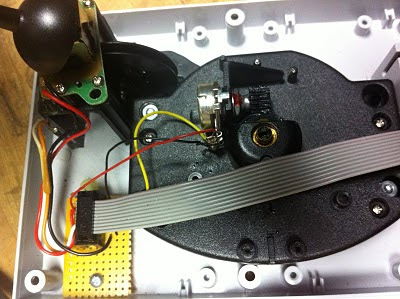 There is also a breath sensor based on the same Freescale chip I used in my previous controller, built into a small project box and attached to the gametrak controller box: 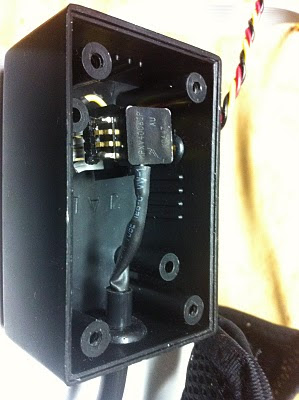 I also have a controller that the player holds in the right hand. It consists of 5 monentary pushbutton switches used to select the overtone played. Here's a view of it: 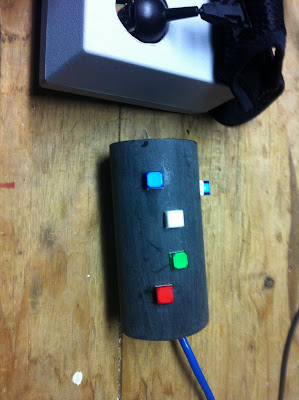 The right hand controller and gametrak box connects to the same Arduino + MIDI Shield box I built for my other instrument (the new box is plug-compatible with the old one). Here's a view from the outside: 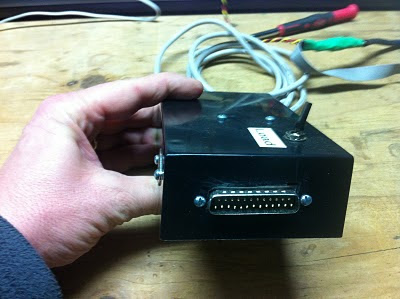 The controller electronics attach via the DB-25 connector. The switch on the top is used to select "load" mode, where the Arduino is able to download code from the IDE, and "run" mode where the serial pins are connected to the MIDI shield, which you can see in this photo of the inside: 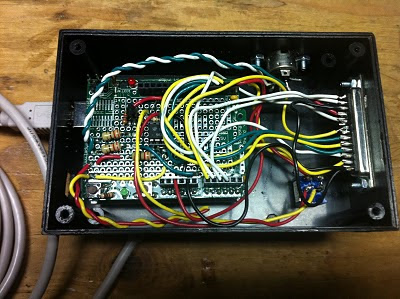 Visible at the upper-left is the MIDI out port.

I had an email conversation with Onyx Ashanti about the cool work he's doing on his Tron Beatjazz Controller. Onyx has some big goals for his work, and some of them could benefit my design, especially the hand-controllers he's working on - they'll have keys for each finger to operate, as well as an accelerometer. I think he's also incorporating some ThingM MaxM LEDs, which is very cool. ThingM's founder, Mike Kuniavsky, is a friend of mine and a former coworker at the University of Michigan.

The night after I had the email conversation, I had a dream that I was playing live at some sort of a club. I had an instrument sort of like my 3-D Trombone, but instead of the overtone controller, in my right hand I held a microphone, and to control the overtones, I moved my right hand up and down in the vertical axis. In my dream, I found it very natural, and was able to play melodies about as easily as on my trombone. I'm still not sure why I was holding a microphone in my dream.

I suspect this idea had been hanging around in my brain for a while, and my conversation with Onyx brought it to the front.

I took that idea and modified my 3-D Trombone Arduino sketch to read the Y-axis position of the gametrak controller and map the value, in a linear fashion, to an overtone.

In a nutshell, the result was unplayable. The problem is that, in order to maintain the "slide" position, the amount of "string" deployed out the gametrak controller has to be constant. So, in order to move up and down the harmonic series without changing slide position, you need to move your arm in an constant-radius arc, which is already pretty hard. But to make matters worse, the radius of the arc depends on which position you're in. So if you're in seventh position, the arc is several feet long, but if you're in first position, the arc is only one or two inches long. It produced some fun random effects flying up and down the harmonic series will glissando-ing in and out, but that would get old quick. Here's a picture of what I mean: 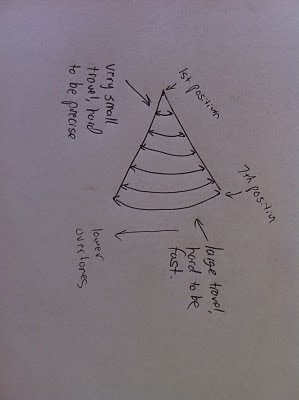 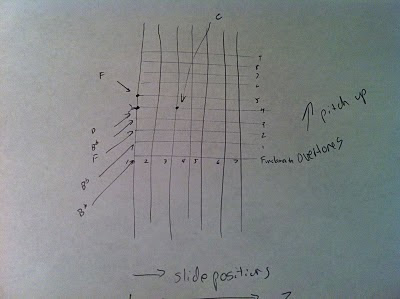 The X axis is the slide position - a trombone has seven of them, and the Y axis is the overtone. A good trombone player can play about 10 overtones, which corresponds to a range of about 3 octaves plus a few extra notes. So where a person playing an acoustic trombone would keep the slide in first position and move up and down the harmonic series with his/her embouchure, the player of the 3-D trombone would trade in the embouchure for up and down motion.

For those of you who may play trombone, here's how a B-flat major scale would look: It turns out that it will be very hard to implement this "grid" idea using my current setup. The reason is that, due to the arrangement of the gametrak controller and the player (s/he holds it near the face), and the travel limits of the gametrak unit's joystick axes (about 90 degrees), it's not possible to cover the whole range of motion that might be interesting to a trombone player. So... back to the drawing board.

A more promising arrangement would be to use the Gametrak as it was intended to be used; base unit sitting on the floor. I'll investigate that and post on it in the future.
Posted by Gordon Good at 11:03 PM

I'm a software engineer with VMware in Palo Alto, CA, and a musician who likes to build crazy musical instruments from microcontrollers. The latest thing I'm working on sonifying air traffic control data.

You will also find a series of blog posts covering the basics of electronic wind instrument controllers - electronic instruments controlled by the performer's breath. While I can't claim to be an expert in the field, I've tinkered with enough stuff over the past few years that I feel like I've got something to share. Take a look at my intro post:

And the posts I've made since then:

If you dig back further in the blog, you'll find some more interesting stuff, including a recount of my week at a workshop at Stanford's CCRMA, and some efforts at prototyping a trombone-like controller.

If you make musical instruments from microcontrollers and have an interesting project to share, let me know and I'll share it here. Looking forward to comments, and to others building crazy instruments.